The TCL 4-Series (2022) models strike a sweet spot between performance and price, delivering respectable picture quality and a very robust Roku TV smart interface. Anyone looking for a very good all-around tv at a good price will be impressed.

Not everyone can drop over $2000 for the best TV and the brightest OLED screen, and that’s okay. Sometimes we’re looking for respectable performance at an affordable price. That’s the sweet spot for the TCL 4 Series (S455, 2022) sets. The TCL 4 Series Roku TV delivers 4K resolution with HDR (high dynamic range) support as de rigueur today, with various sizes available for well under $1,000.

All sets in TCL’s S455 range offer smart TV features and can handle most streaming and online entertainment sources thanks to the robust Roku TV platform.

The TCL 4 Series/S455, or the TCL 4 Series as we’ll refer to it for the rest of this review, is a lineup of entry-level 4K TVs released in 2022 as a successor to the widely popular TCL 4 Series/S435 2020. It also occupies the same feature set as the TCL 4 Series / S446 2021, but that series runs Google TV smart platform, while the S455 runs the latest Roku smart interface, which is fairly unchanged from previous versions.

Like its predecessors, all TVs in the 2022 TCL 4 Series deliver excellent pictures at very reasonable prices. However, being entry-level TVs, their level of performance and feature set is pretty basic; they don’t have any advanced gaming features available on the LG OLED C1 like HDMI 2.1 bandwidth or variable refresh rate (VRR) support. The sets also have a very limited picture and motion processing, without advanced features like motion interpolation.

Still, these TVs make for full-featured packages that are simple to use and that surprisingly only make a few compromises in eliminating a handful of high-end features. If you’re looking for an affordable set that’s nearly the complete package, this TCL 4 Series models will not disappoint.

Available now, TCL unapologetically offers more options in the latest 4 Series line than you can shake a remote at. Sets in the S455 are available in sizes from the 43-inch model all the way to 85 inches, but for this review, we’re looking at the 65-inch model, otherwise known as TCL 65S455 Roku TV.  List pricing starts at under $250 for the 43-inch model and just over $1,00 for the 85-inch set.

TCL also offers the 4-Series in a different TV flavor, Google TV. Our review focus on the Roku version, indicated by the S455 model number. Google TV-equipped sets are distinguished by the S446 model number, but the hardware used on both versions of the 2022 4-Series is identical.

To be fair, though, there’s no 85-inch Google TV model. Also, since our reviews look at both hardware performance and user experience, which can be greatly influenced by software and app selection, we won’t be diving into the Google TV models at length in this review.

That said, across the TCL 4 Series Roku TV (S455) and Google TV (S446) models, we expect almost a similar level of performance on all models. Everything, from port selection to features like HDR support and display technology, our recommendations should carry over from one model to the next.

Also, out of TCL’s six different TV model families, the TCL 4-Series is the company’s entry-level 4K line. There’s the 3-Series below it but it doesn’t support 4K and starts with a 32-inch 720p set. If you’re considering upgrading over the 4-Series, the TCL 5 Series Roku TV (S555) adds features that are missing in the 4-Series, including a quantum dot display and Dolby Vision support for a little more money.

Dressed in basic black, the TCL 65S455 shares the same style and design footprint as the 50-inch TCL 65S435 we reviewed last year. A simple design with splayed legs on either end to support it on any standard tabletop. The V-shaped legs are steady enough to keep the panel from falling over, but it doesn’t take too much support for a set that weighs less than 16 pounds. Should you want to wall mount it, you should purchase a standard VESA 200 X 200 millimeter, check out some of the best TV mounts.

The screen is surrounded by what we consider to be average-sized bezels. The bezels are about half an inch thick on the top and sides, and slightly wider along the bottom. The bezels don’t affect your viewing experience, although the TCL badging on the bottom of the frame is a little distracting given the size of this set. And with most LCD sets, while the display itself is thin, the supporting electronics, connections, and rear-mounted speakers make it thicker, bringing it to almost 3.5 inches at its widest point.

The TCL 4 Series (2022) boasts a 4K display, firing full 3840 x 2160 resolution, with direct backlighting and HDR (high dynamic range) support. The result is relatively good (if basic) viewing experience and a better viewing experience than you might expect at this price range.

The 65S455 doesn’t stand out when it comes to brightness, even in Bright (HDR) mode with the backlight turned up; it maxes out at 244.05cd/m2, which is half the 488. 01cd/m2 peak brightness on the 6-series. Again, it lacks local dimming that’s available on the 6-series, and its Dynamic Contrast settings can only brighten or dim the entire screen simultaneously.

When watching BBC’s Planet Earth II, the scenes look great though you can easily notice the TV’s dimmer screen and smaller color range as compared to the 6-Series or more expensive sets like the LG OLED Evo C2 or the Samsung Q80B. Still, the trees and blue greens on the “Islands” episode look clear and natural, though fine textures like fur and bark are crisp when well-lit. That said, shadows become a bit blurry and the fairly dim screen doesn’t look quite as lifelike as they do on brighter panels.

As mentioned, the TCL 4-Series TV doesn’t offer any sort of automatic switching to game mode or detection of a game console, such as an Xbox One X. When you switch to game mode, it is a bit intuitive, since the mode is not offered in the regular selection of picture modes, and does require navigating into a separate menu of advanced picture settings to activate.

The TCL 65S455 supports 4K gaming, and you can stream content with 10-bit color support at 24Hz. However, this panel does not support additional frame rates for streamed content, nor does it support HDR modes for either gaming or streaming. That’s fine if HDR content isn’t at the top of your list, but it doesn’t mean that games will appear less impressive than on other 4K sets.

And, while this TV doesn’t offer HDR support when gaming, it does deliver great response times, an indispensable feature in fast-paced games. If there’s an area where this set is lacking, it must be audio. With a pair of 8-watt speakers delivering the audio juice, the overall volume is underwhelming and relatively weak and isn’t well suited to rooms that have a lot of ambient noise.

The included Roku TV remote is a standard, infrared-only model. You should not confuse it with the high-end microphone-equipped Enhanced Roku TV remote that allows you to use Roku’s voice search features. This one is a small plastic wand with curved ends and a distinct direction pad.

The Roku app for Android and iOS lets you use voice search if you wish, though Roku’s functions are still limited compared to Amazon Alexa that’s found on Amazon Fire TV and Amazon Echo Dot speakers, Google Assistant on Android TV devices, and Siri on the Apple TV.

With the Roku TV platform, the TCL 65S455 can access a wide range of streaming services. The major players here include Amazon Prime Video, DirecTV Now, Google Play Movies & TV, Hulu, Netflix, Vue, Sling, Vudu, and YouTube. As expected, Apple is missing from the list and Google Music isn’t also available, but you still have Amazon Music, Pandora, Spotify, and many other streaming services.

Many other satellite providers have Roku apps that allow you access to their VOD libraries and even TV directly via the TV, without necessarily connecting a set-top box. In case you don’t want to subscribe to any service, the Roku Channel features its own library of free movies and TV shows.

Should you buy the TCL 4 Series?

The TCL 4 Series (2022) isn’t exceptional in any way, but it’s a reasonable performer for the price. With a range of models, starting with 43-inches all the way to 85-inches, all reasonably priced, this series should appeal to anyone looking to get a decent TV while spending as little as possible.

The Amazon Omni TV will set you around the same money as the higher-end TCL and Hisense models; it ekes out fairly better contrast and color performance than the TCL 4-Series in this review, and the Amazon Fire TV platform has handy features, including a voice assistant.

That said, while you’ll spend a fair amount more, the TCL 6-Series, LG OLEDs, and the Hisense U8G line offer far brighter, higher-contrast pictures with better color, making them worth the relative premium if you can afford them. 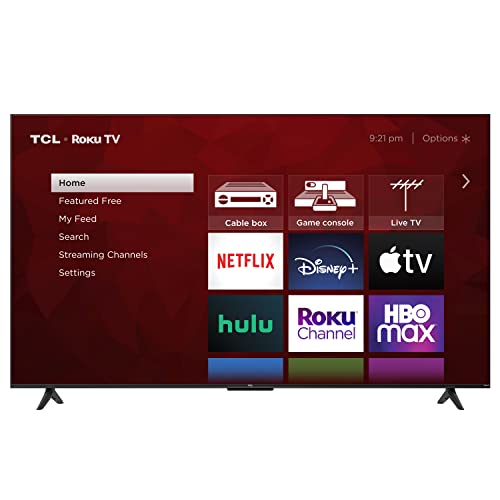